Feeding The Dog At The Table 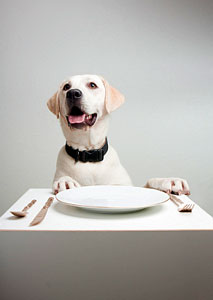 A lot of times employers come to me discussing problematic behavior with one of their employees. Parents come to talk to me about problematic behavior with their children. Spouses talk to me about frustrations with their partner. As it seems to go, the person comes to me and says no matter what I do, it just keeps getting worse and worse and worse. The person’s behavior just keeps continually being bad.

Here’s what happens. If you feed your dog at the table one time, the dog learns that if they come back, you will feed them. But if the next time they come back and you don’t feed them, you can’t untrain that dog, that he or she is going to get fed the table. So what happens is the dog thinks, hey I’m going to get some food here, so it starts to beg. And then you get tired of the begging, so finally you give in and you give the dog some more at the table. Then you resolve, I’m not going to give in any more. I’m not going to feed this dog at the table any more.

So what happens? The dog comes back, it whimpers and it begs and you don’t feed it. Then it gets increasingly animated. It starts to bark and yelp and then it barks really loud. Then if you don’t feed it at the table, it jumps up on the table. So to shut it up, to stop it, what you do is feed it again. And all you’ve taught the dog at that point is that, oh next time I want to get fed at the table, I can go straight from begging right to jumping on the table and that’s what it takes for me to get fed.

Well the same is absolutely true for people. If you’ve been an employer and you’ve given in to your employees, you’ve given them rewards they didn’t deserve, you’ve given them perks that they didn’t earn – what you’ve done is you’ve taught them, oh this is what I have to do to get fed at the table. Then at some point if you stop giving them those perks, they think, oh I’ll just bark louder. I’ll do something to get these perks back. So they complain, they whine, they threaten to quit, they threaten to strike, they threaten to sue you if you don’t give them the thing back. And if you buckle under that kind of pressure, what will happen is they will learn the next time I want my perk back, the next time I want my treat, my unearned reward, all I have to do is throw a temper tantrum.

The same is true with kids who throw a temper tantrum. If you have a kid who you are trying to teach to behave well and if you give in, you’re at a restaurant and you say “if you act up one more time, so help me I’ll….take you out to the car” but if you never take the kid out to the car, the kid learns that he can get away with murder. You can keep making it worse and worse and worse. Until you consistently discipline your employees, consistently discipline your kids, you will not teach them that reward comes from correct behavior. You will teach them that temper tantrums are what will get the response they want.

You know there is a story I heard once about a little boy, Billy, playing with his friend Tommy in the sandbox. Billy’s mother called out “Billy, Billy, it’s time for supper.” Tommy looks up. Billy keeps playing, has got his head down pushing the trucks in the sandbox, not changing a darn thing. A couple of minutes later, Billy’s mother calls out “Billy, you come home right now. Young man you are going to be in trouble if you don’t get here.” Tommy looks at Billy and he starts to get nervous. “Billy, I think your Mom is calling.” Billy just keeps playing. He’s got his head down, pushing those trucks around making the bulldozer push the sand in a big pile. Couple of minutes later, Billy’s Mom calls again, “Billy, you little runt. You get your rear end home or I’m going to tan you. I’m going to tan your hide so bad you’ll scream for a week.” At this point Tommy is getting really nervous. “Hey, Billy, I think you’d better get home.” Billy keeps playing. He’s going brrrrrrrrrrrrrrrr, brrrrrrrrrrrrrr. Tommy is getting super nervous. Billy just keeps playing.

At one point, finally, Billy’s mother screams out “Billy, if you don’t come home right now, I’m going to come out there, I’m going to cut your head off and feed it to the dog.” At which point Billy looks up and says “Tommy, my Mom is calling. Got to go for dinner.” And he runs home. And what Billy’s mother had taught him was that she wasn’t serious about him coming for dinner until she started making bodily threats. Billy’s mother had fed Billy at the table. She had fed the dog at the table, so that Billy knew she wasn’t serious until she started screaming.

The same is true when you are working with people. If you feed the dog at the table, all they will learn is that’s how loud you’ve got to scream to get your way, how loud they have to have their temper tantrum to get their way.

© Roger Hall, PhD, Compass Consultation, Ltd., www.CompassConsultation.com
You may reproduce this material for personal use only in its entirety and with this statement.
All other use is prohibited without consent of the author.