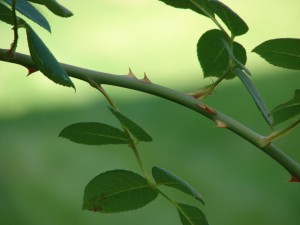 There are the pricker bushes.  These are the older couples who have been together for about 50 years and all they do all day is bicker and complain about one another.  “Oh, he did this.”   “He’s so stupid.”  “He’s been doing this since we’ve been married.”  He says, “Ah, she does nothing but complain.”  All they do all day long is poke and fight and bicker.  This is the pricker bush.  It is like two pricker bushes that have been planted next to each other.  Over the course of years, their roots have grown together, their branches have grown together, they are so intertwined that if one of them is pulled out the other one will be pulled out as well.  That’s like these old couples.  If one of them dies or if one of them decides to divorce in their later years, it sometimes kills the other person because their lives are so entwined.  Even though all they do all day is bicker and fight, they really can’t live without one another.

The second kind of couple is the rose bush couple.  I’m convinced that after meeting hundreds and hundreds of old couples that even happily married couples spend plenty of time bickering and fighting.  “She’s been doing this since we’ve been married.”  And she responds, “All he does is complain and whine.”  So how exactly is this different from the pricker bush couple?

Because at least this couple produces something beautiful.

They tell one another they love each other.  They hold hands while sitting at the doctor’s office.  They still give each other a kiss when they part.  She makes his favorite sandwich.  He still buys her flowers each Friday and holds the door for her.   This is like two rose bushes that are planted together.  The branches and the roots grow together and intertwine.  If one of them dies, it often kills the other person, because their lives are so intertwined they can’t live without each other either.  And they produce something beautiful.  Roses have thorns.  Rose bushes will stick you if you handle them but at least they produce something beautiful.  Don’t make it your goal to never have conflict with your spouse.  That’s unrealistic.  Couples who have been married for years and years do have conflict.  They do bicker.  They do fight.  But at least they produce something beautiful.  You can too!

Don’t think that happy relationships depend on the big things.  Happy marriages are a result of a thousand small acts of kindness.